Master Robert began his Kung Fu training in 1979 under Master Y.M. Cheng. His studies include Northern Shaolin Long Fist, Praying Mantis, Tai Chi, Hopkido, and Tae Kwon Do. Master Robert was granted permission to open the Brea Shaolin Kung Fu School in 1985. Working in security from 1983-1990, he actively used his martial skill in his everyday business-life, becoming very proficient in their execution. His expertise in the arts was recognized when he received gold, silver and bronze medals in the International Praying Mantis Tournament in 1993 in Yantai, China. 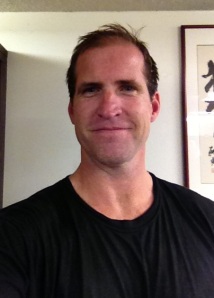 Scott began training at the school at the age of 15.  In addition to his kung fu practice, he attended college at UC Santa Barbara, moved to New York City and back, and started a family.  He has a great appreciation for the fighting abilities earned over years of hard training, as well as the health benefits that are the by-product of that hard training.

He believes one of kung fu’s greatest functions is providing balance in a fairly hectic, but full life.  The training demands complete attention and mindfulness and this likely influences most areas of his life.  The rigorous physical demands of class also ensure he maintains a high level of physical fitness.  Lastly, he is intrigued with the philosophies of the various Chinese martial arts.

Scott used to live just down the street from the school, but now lives in Irvine.  He works in the financial services industry and has a packed house with a wife, four kids (two toddlers), and a dog.   In his spare time, he enjoys most sports (playing, not watching), wine, and cooking for and taking bike rides with his family.  He is more than happy to answer questions from lower rank and will always recommend training at home as often as possible in addition to regular classes.

Scott started at the school in 1993 when he and his father, Alan, mother Kendy, brother Mark and sister Carolyn (all black sash at the school) began training together as a family.  He had always wanted to do some kind of martial arts after watching martial arts movies and credits them for being his early influence.

Kung fu serves many purposes in Scott’s life.  He is driven to better himself and readily admits there is always room and need for improvement.  He works with his family in their air conditioning business and finds the physical training essential for staying strong and fit, as well as providing stress relief and post-workout relaxation.  Focus and energy are restored.

Aside from training, Scott enjoys camping and water activities like wake boarding, knee boarding, boating, and riding wave runners.  He lives in La Habra with his wife, Christie.