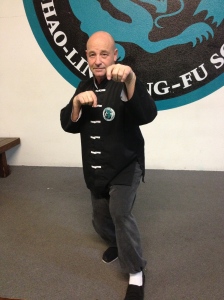 Power is something that most everyone can develop.  Proper breathing (timely exhaling during the execution of a strike), whole body strength (a firm rooting to the ground, strong and loose muscles, and release of energy), and proper body alignment (posture and structure) create more power than what simple muscles can deliver.  There is far more to power than strong musculature.  Of course, if you attempt to employ power without correct speed or technique, then you have a wasted movement as you will not likely impact your target or if you do it may not have much effect.

Speed is a necessity for many techniques to work.  Without proper speed, your movements will likely be blocked, avoided or countered or, defensively, your blocks and evading techniques won’t be effective.  As with all of the components to fighting ability, speed can be developed with consistent training.  Each time you practice a movement – be it a punch, a kick, a sweep, a throw, a joint lock – you must try to do it faster (while maintaining both proper form and power).  Relaxation is a must to maximize speed as tightness delays movement.

Endurance ensures you have the physical capacity to successfully utilize techniques after a good deal of physical exertion.  You never know when you may be called on to defend yourself and loved ones from one or multiple opponents.  Sparring is typically held towards the end of class for this very reason.  Much of the hard work has already been done and it forces you to gather yourself (read:  “your energy”) and give 100% focus and effort when sparring your opponent.  This hard training is often when “chi” is cultivated and can come into play for more advanced students.  Never forget, you may be strong and fast, but if you’re too gassed to react properly in a physical encounter – you’re history.

Technique conquers all.  Technique is a broad concept that covers the proper execution of defensive and offensive fighting movements – including striking, grappling, throwing, sweeping, timing and distance.  It is the essence of any and all martial arts.  You may have power, speed and endurance (which might make you an incredible athlete), but without technique you will very likely not have the ability to successfully defend yourself against someone who does.

Learning a technique is one thing, but truly possessing a technique in such a way that you can call on it immediately in a fight is another.  This kind of mastery takes many years of practice with your kung fu brothers and sisters.  It’s learning the technique, re-learning it, repeating it over and over in hundreds (even thousands) of different positions and scenarios for the purpose of using it in the few serious physical engagements you may encounter.  Luckily, it doesn’t require a large arsenal of these mastered techniques to successfully defend yourself from untrained and even trained adversaries.  However, mastering technique is unquestionably the most difficult and time consuming of the four components.  It is also one of the most rewarding.

You must develop and maintain power, speed and endurance to make techniques work.  In fact, all four components of martial skill must be present.  If a punch or kick is flying to your face or body, your speed and technique will allow you to create space from the oncoming blow and block it.  Speed, power and technique are still required to successfully counter the attack.  Endurance may be required in certain circumstances, but is a necessity in your training when you are developing your speed, power and technique.  The endurance aspect brings ALL the components of martial skill together when you are exhausted while sparring and have to draw on your highest abilities to bring power, speed and technique to bear against an opponent.